Update Jun 3, 2014  14:46pm
I made another attempt at recovering the battery that has not yet been found at the beach today at 2:00pm that was supposed to be low tide on this day of about 1 Meter.  When I got to the beach I could see the lines in the sand I had made the night before as there seems to have been alot of trafic of something that seems to have wiped both my lines out.  I made new lines that are not as acurate as my first and with these I continued the search in the water.   The water at the estimated point of the estimated aircraft crash was at about .5 meter water level.   The water was very dirty with limited view of not more than 4 inches at best.  So there was no chance of finding it visually.  I continued using my feet to search but later found nothing but broken glass and then some kind of strange sea creature dashed out from under my feet that freaked me out to a point to abandoning my search efforts.  I covered about 100 sq meters at that point with nothing to show for it.  I also offered Loe and the gang of bums at the beach a 100 baht reward if they were to find it but they didn't think that was enough to even give it a try.  What does the labor of a beach bum run these days?  That would have got them 3 Sato's if they found it!

Update jun 3, 2014 16:25:
I powered up the Fr-sky D8R-XP receiver and did a full lab test everything is ok after the clean up above.  So things are looking up so far.  I continue to dry the other parts before power up tests on them.

Update jun 23, 2014 8:19am
we got all the parts of the X-525 working again after a loan of the star tool needed to open up the gps module that we got from Big Pual.   That was the last part we couldn't get to work without opening it.  After we opened the gps module and soaked it in distilled water for 10 minutes and dried it in the sun for 2 days we got the complete set working again.  We now plan to give it a flight test tonight to see how it really goes.   I also looked at the flight logs from the Taranis on the night of the crash and noted the failure couldn't have been the power connector for the lights that failed since there is redundant 5vdc power to the receiver and flight controller that comes from each of the four esc's to each prop.  The last telemetry signal received from the aircraft showed that we had 11.8vdc at A2 and 5.04vdc at A1 then a sudden rssi signal loss from 63 to 0 from the reciever at 23:26:11.409 on Jun 2, 2014 when I was in hover mode with all sticks almost at perfect center positions with mode switch still set to gps.  So all I can think it could be is that we had a complete battery failure from both power path of the lipo at the same time since loss of power from ether power path would not have looked like this.  If the balance plug power failed as we had originally thought, then the lights would have gone out as we did see but the aircraft would have been put into auto land mode as the flight controller would have sensed battery power low so the aircraft would have come down with controlled decient and the telemetry would have sensed the A2 power voltage drop to zero.  I plan to simulate the broken balance plug to be sure I'm correct  to see if we need to make any changes in wiring for future flights of this aircraft.

The X-525 after disasembled and drying in the sun: 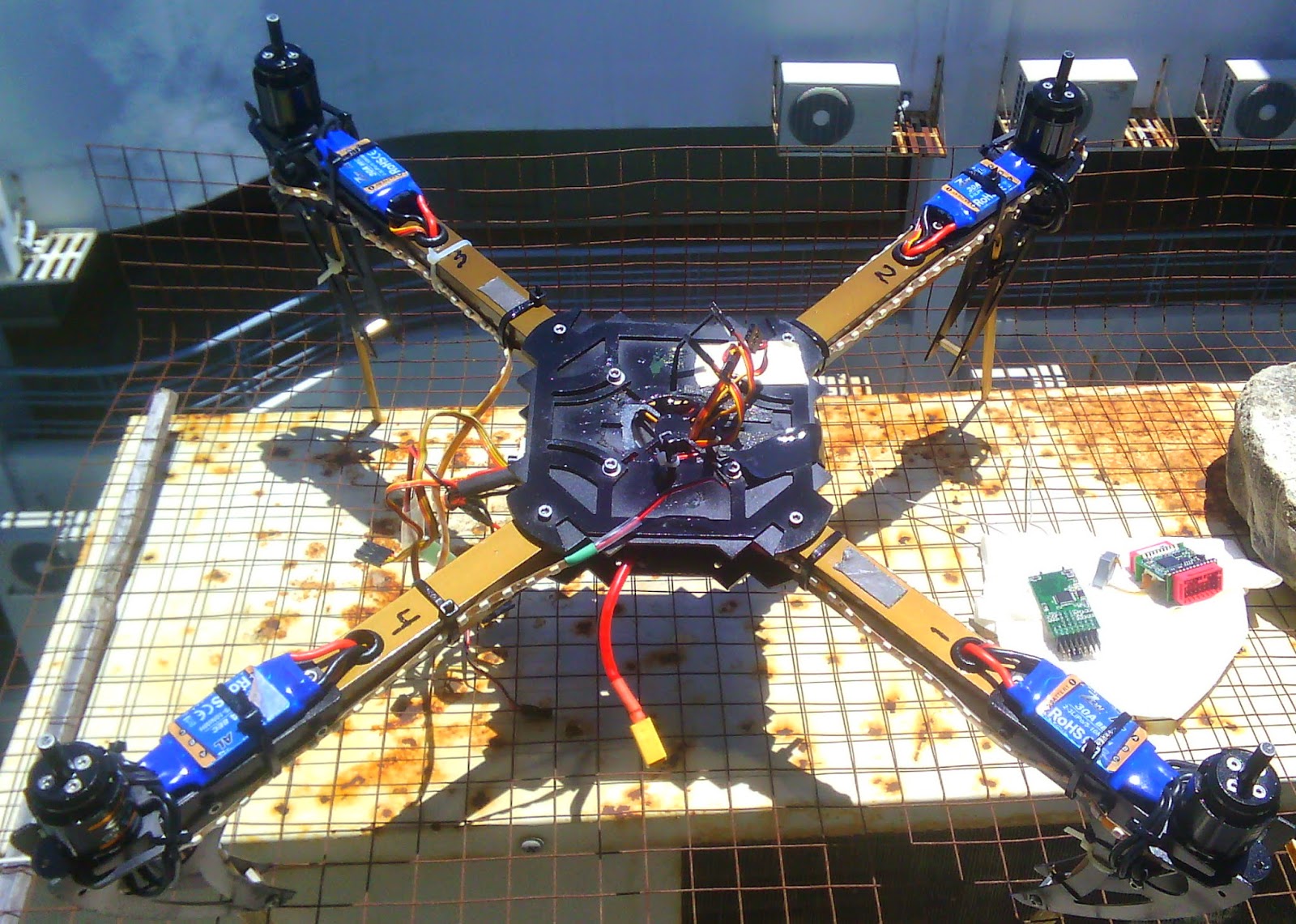 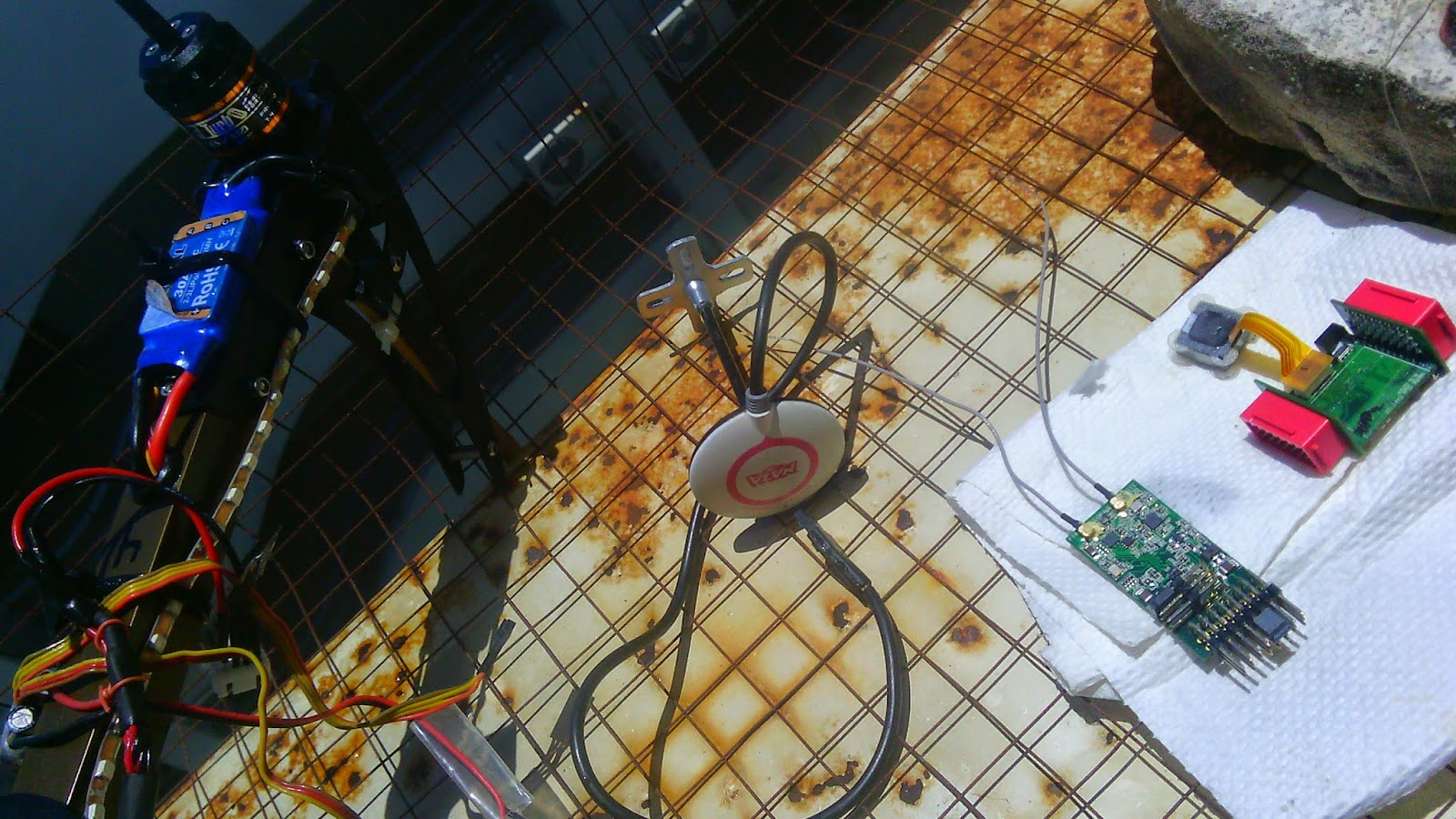