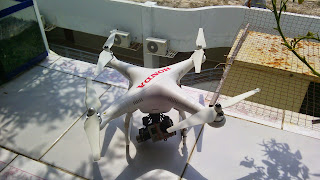 Paul picked up another new toy this week. A second hand DJI Phantom V2 with Zenmuse gimbal. We later found that the Zenmuse gimbal didn't support the Gopro V1 we already had so I personally invested in a second hand Gopro 3 Camera that I was looking to get in the near future anyway. Before we got the new Gopro we attempted to use what we already had including giving the Gopro V1 a try with the zenmuse gimbal. With only one flight with it we were able to get some good shots but at landing I noticed the gimbal went into overcurent mode and auto shutdown on the vertical axis. So the next day I incorporated a cheap 1000 baht camera I got from Tokcom some time back that is made to record from a cars dash board. It still required adding counter balance using some balance mass and some rubber bands to hold them in position to reduce torque load on the brushless motor drives. The cheap cam has a good wide angle view and captures HD at settings up to 1080p at 30fps. I set it to 720p 30fps for our flight test to reduce file size as only plan to web publish the shots they can't be very big. Cool thing is the camera auto powers up and records when you power up the Phantom. Bad part we later learned is that it seems to erase the last video and record a new video when you power off and then on again with phantom V2 power switched. I'm not sure this can be set someplace to not happen in the cam like this or not yet. But now with the new Gopro 3 I don't think I'll be using it on the phantom anymore anyway but might find it useful on one of the other aircraft at some point as in the daytime it took nice good quality shots. But when we tried the cheap 1000 Baht cam at night at the beach we found that there wasn't much to see, so it's strictly a daytime shooter. Another cool thing on the gopro 3 is that it has a wifi preview that is visible from my android phone as an app that can also be used to change camera resolution and settings and take still frame shots in flight if desired. Not sure what kind of range we will get out of it but should be good to about 30 – 100 meters that should be far enuf for most shots we will be taking with this aircraft. If that doesn't end up being enuf there is also an option to use the zenmuse video output that taps video feed from the back of the Gopro 3 and feeds it out with 4 wires that provide for 12vdc with 2 ground wires and video output. I'm not sure my fatshark video tx can handle 12vdc for power yet but will check that out if the wifi isn't doing what we want or at some point we will want to try fpv with this cool new toy. Some videos captured with the new aircraft seen here:
This first video was taken with the Gopro V1 rubber banded onto the zenmuse gimbal. Video mode on the gopro was set at 720p and later recompress for the web with ffmpeg with H264 codec at 2000kb/s compression.


This next video was taken with the cheap 1000 baht camera made for car dash board recording as seen here: 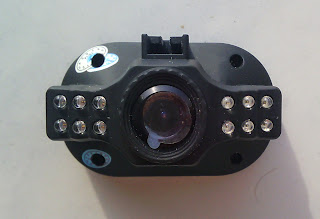 . Video mode was set to 720p and later compressed with ffmpeg in H264 codec at 2000kb/s same compression used in gopro video above. still takes good shots in the daytime as you can see here:


Some shots taken with the gopro 3 at Pattaya beach at night to show how it's working in low light conditions:

Update: May 9, 2014
With the yaw gain set to 40% it didn't seem to slow yaw much at all as I had hoped it would. What it seemed to do is make it not hold it's yaw position. With a small breeze on the 12th floor balcony it seemed it would rotate as much as 45 degrees without me giving it any command to do so. It also failed to stop moving when I did a quick flick of yaw it would take time to stop yaw movement. So I went and set the yaw gain back up near what it was at 80% and gave it one more short flight test on the balcony. This time I gave it big quick movements and when I let go it would halt movement and lock it's yaw position more like I had hoped. So it seems yaw speed can't be controlled at this point with gain settings. I will just have to adjust to the way it now flies until we replace the receiver with an frsky and program the Frsky Taranis transmitter to control it at some point in the future. With that we can setup expo and dual rates on yaw to provide the kind of movements I really want. With the frsky receiver we will also have telemetry to indicate battery status that will be very useful when flying FPV where we will not be able to see the status led lights.