We (Me, Raf and Dave) saw A real UFO last night flying over Pattaya. Me and my two friends Raf and Dave were walking down the beach walk at Pattaya beach looking for girls when I noticed and pointed out an object flying over the Hilton Hotel headed toward the waters edge and continue on a perfect strait line with never a change in direction or altitude. No one took much notice of it as we have these things fly around here all the time with me piloting some of them, but this one wasn't flying a normal flight path. 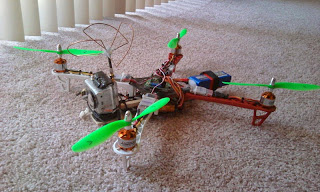 I think it must have been something like this image above or at least similar.
I first saw it flying over the Hilton Hotel only about 10 meters above the building or a bit to the north of the building and a bit lower at about 11:05pm around Soi 9 that from what I saw looked like it must have been a quad-copter that was about 450mm in size that when it flew almost directly over my head was a symmetrical design (square shaped), with 4 props. It wasn't low enuf to be able to hear any prop sounds but we were also near Soi 8 that had a lot of live band noise that would have covered most of it up at that altitude. It had 4 dim led lights of different colors in front and back on each corner and one white strobe light that flashed at about 1 time per second. It continued to fly off out past the coast of Pattaya on a north east heading at about 30 – 50 meters altitude at a rate of 30 - 50 km/h and continued as far as my eyes could see up until about 11:09pm when I lost site of it when it was about 3km off shore to never return. I had originally thought it was something I had seen before that belonged to our Russian friend that flys with us at the beach that also has a 450mm quad with a naza M controller on it, but I don't recall his having the white strobe on it but I could be wrong and forgot about that. This aircraft I estimate must have been about a 20000 baht aircraft from what I could only estimate. This is the second aircraft that I've seen in the last 2 mouths that looks to have crashed off the shores of pattaya. The first one I saw about 2 months ago looked to be a cheap counter spinning prop copter that I've seen that are made in China that I saw were being sold at some of the booths during the music festival for 1000 bhat or less complete with radio. That one looked to be spiraling in a circular pattern and moving off the coast at about 20 km/h until I again lost site of it about 2km off shore so I'm sure it could never have returned. That one was more toward the Hard Rock hotel when I first saw it fly off shore from what I could see. This is just another reason we should make sure that the failsafe settings on the receiver are setup correctly if you fly anything that can take advantage of them. To make sure an aircraft can do an auto return on radio failure with a naza or other controler that has GPS data available, the receiver radio on the aircraft still has to have the failsafe setup properly or as we should know it has no function at all.
My best guess from the direction this last object came from, it came from and the distance I estimate that one of these objects maximum range will take them of about 10km or a bit more with 50km/h max speed and about 12 minute max flight time. It would appear it might have come from the elephant village groups airfields flight path. So maybe we will hear about it soon enuf when we start talking to some of the local remote pilots about it. 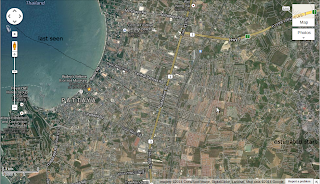 The image above is the estimated path from what we saw and the range the aircraft is estimated to be able to fly.
Posted by Scotty at 12:48 AM