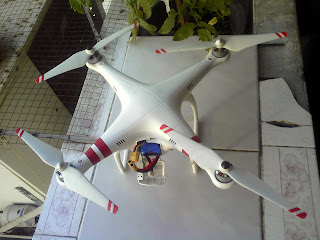 Update May 1, 2014
We have continued to have intermittent problems with this Phantom aircraft and we are now trying another set of gain settings in hopes to partly correct some of the problems:
Pitch Roll Yaw Vertical
180 180 100 125 Basic Gain
90 90 Attitude gain

As some of the problems seem to happen when we do radical quick stick movements I'm hoping that the reduction in basic gains might prevent this from happening. Also a slight increase in attitude gain might improve correction times. Without high Basic gains the small increase in Attitude gain should balance out and hopefully still not cause oscillation problems. I've also had problems with one crash from a quick decent that put the aircraft into an unrecoverable spiral so I'm hoping the reduced vertical gain and slight increase in Attitude gain might lesson that from happening again. I also resoldered the power connector leads as one has lead already broke so I resoldered them both today.

Update Mar 29, 2014:
We had another day at the beach with phantom s/n 4. This time most the flights I flew with it were all perfect. I was flying conservative in most my flights to make sure not to put it into the theoretical oscillating state that cause it to crash. I went through about 4 batteries OK but the last one I flew flight 5, I was taking very fast runs up and down the beach when again on the right hand side of the beach I was in the return phase back to launch when I pulled full back pitch to gain full speed and started also an almost full pull back in throttle to get maximum rate of decent for about 2 seconds. Suddenly the aircraft went into a wobble oscillation in about 1 foot radius and continued to descend. I let go the controls hoping it would stabilize but after 2 second off the stick the wobble continued and so did the rapid decent with the aircraft almost always at a bit more that 45 degree pitch average but in a rotating pattern. At that point I started to pull back on throttle to get it to descend before it would drift into the sidewalk as pulse input on roll and pitch had no noticeable response. It came down a bit hard but undamaged. I spun It up back at camp and all was looking OK. After that Paul took it for another flight and it was still flying OK. So I guess you just can't do radical high rate of decent on this aircraft. Does that mean I should crank up the roll pitch gain or down gain? Or maybe crank down some on vertical gain? I'm not sure. Maybe this is just something as a pilot you just have to know the limits for. Never pull full stick down throttle for any long durations. For longer decent times limit throttle pull back to 25% instead of 0 - 5%. Limit full stick down throttle (0%) for less than 2 seconds and only at very low altitude and limited rate of decent speeds.

Update Mar 26 , 2014
We had phantom s/n 4 out again at the beach last night with at least 4 good flights but then Paul said something funny happened. He said he had no pitch or roll control. We powered it up again and this time I took it out. It took off fine but I also noted that I had no pitch or roll control at all. I still had total control over throttle and failed to even try yaw control. I landed it on the ground gently and told Paul I would have a look at it in the morning to see what might be the problem. This morning before I even fired up the phantom s/n 4 I took apart the TX and checked that the pots were turning and all the plugs were plugged in. I saw nothing mechanical wrong at this point. So I fired up the full set phantom and TX with the phantom aircraft hooked to my computers flight assistant. I looked at the radio control section and everything was moving as it should on all sticks of TX. I ran over 200 cycles on each stick to see if it had an intermittent problem but it continued to work. I cycled power on both the TX and the aircraft 10 times each time it came up OK fully functional. So this is some kind of intermittent problem that has no known point of failure. So the option is to try bind our spare TX s/n 3 to this aircraft s/n 4 and see if the problem duplicates again. Another possibility is maybe the mode switch was set to failsafe mode. But even in that case I would think the throttle would also fail to respond until the mode switch was toggled from atti to gps or other mode. This symptom explains the first problem we had when I had to put it down on the edge of a tree on the first beach flight day on 3/18/14. Paul also had one flight yesterday where he put s/n 4 into a rocking roll action for more than 20 cycles and got it to crash but at low altitude with no damage. This was a flight before the flights that we didn't have any roll or pitch control. Still could be more than one problem. Just wait and see?

Published 3/18/14:
Paul flew it at least 4 times without a single incident and seemed happy with the flight characteristics of these gain settings. However on 3 of my flights I had some strange things happen. The first incident for me was when I was at a distance up the beach of about 50 meters away at about 20 meters altitude when suddenly it seemed I lost control like it pulled right without input in gps mode. I let go the controls thinking I must have brain farted and I would wait for it to stabilize and pulse the stick to find out how it was really oriented. But even when I released the controls it didn't level and it started moving toward the side walk. It still had altitude of about 10 meters so when I saw it wasn't going to level I pulled back on the throttle in hopes it would at least start to loose altitude and it did follow my input in this case. I was able to get it to the ground just before it hit the sidewalk and ended up with a bit of a hard landing on the sand after having to fall threw the edge of a tree. I looked at it after impact and it looked physically unharmed. One prop spun a bit hard with some sand but we were able to spin it out in no time. I continued to fly out the battery in a second attempt but only at very low altitude and no more than 10 feet away as my original theory was a radio hit. Again everything seemed to fly OK but when I started to rock the aircraft as fast as possible with fast stick roll actions it suddenly fell to the ground but this time it seemed like the left side dropped all the way to the sand. Lucky it was only about 6 feet altitude and crashed into the soft sand again with no damage. Paul was able to continue to fly it 4 more times after this and he never had any problems with it in his flights. I flew it for the last time as it seems it has some kind of problem with high speed rocking rolling action. This time I made sure not to attempt any actions like that. I flew only smooth flight on the last one but did some more distant flights up to about 40 meters away and with this I tried high speed flight with rapid deacceleration. All those seemed to go OK. I also did fast as possible climb and decent but only from 2 feet to 15 feet and back down as fast as possible thinking that this might also trigger an event but it didn't. So at this point I'm not really sure what's up with phantom s/n 4. Maybe one of the esc is a bit dodgy and can't handle quick rpm changes on a regular basis or maybe the present gain settings have some kind of resonance at some point that at high speed rocking gets it into an over correcting loop? Maybe the problem is just me brain farting as it seems it never happens when “Paul the toy man” flies it and he had more flight time on it than I did. None of these theories can explain all 3 events perfectly so maybe a combinations of problems like brain fart and bad esc. Until it happens when someone else is flying we can't be sure. I think just fly this one a bit easy and not push it too hard and maybe try to avoid flying over water until we isolate something.
Posted by Scotty at 9:59 AM