Creation of a UFO hoax with quad-copters

With all the cool aircraft and equipment we now already have in our present inventory of toys and after watching a preview of an episode in UFO Hunters TV program, a crazy idea popped into my mind. Wow we could create a cool UFO hoax video and publish it on youtube.com. I'll bet if it was believably enough it would get a lot of web hits. I started chatting about this crazy idea with Paul the toy man and without any hesitation he responds “I'm In!!”. So the basic concept of making this video is that it centers around a small group of 3 or 4 people out in the country side in an outdoor event or camping trip party like atmosphere at night. In this event they are also playing with two video cameras or maybe one good cam and another being just a good telephone video, filming there trip activities around a camp fire telling jokes and other such things. Suddenly one of the people in the group points up and says “what's that up there!”. 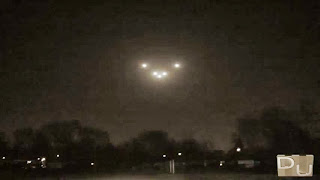 It doesn't look like much at first with just one light in the sky that blinks at some odd intervals. As they all look up and the video also points at the object suddenly the single object breaks apart into 5 flying object and they all move in a controlled pattern as they continue to move closer to the the group. Some people in the group start to get scared but others think its cool and one of them wants a closer look. But as the objects get closer more strange lights begin to be seen including a bright light that lights up the one interested party in the group that goes to get the closer look. It lights him up with a bright white light and then some laser lights also begin to be seen from another of the flying objects. The group of aircraft now surround the single guy as the rest of the group yell at him to get out of there. He seems stunned and suddenly falls down. Then as suddenly as the aircraft appeared they all fly away out of site as a controlled group. The group runs to see there friends to see if he's OK. He looks back up at them and says wow that was cool. He is drunker than most of the others in the group so it's understandable he might think that was cool. But the others in the group are scared and all pack up quickly and get the hell out of there. And that's how it ends as they pull away from the site on there bikes or cars.
To achieve this we will use 5 of the quad-copter aircraft we now already have In our inventory that we will just need to add some additional lights and lasers to. We will also need 5 pilots, one on each aircraft and a 6th person that also has a remote that is dedicated to controlling just the lights on all the aircrafts. So the pilots can focus on just flying a planed flight sequence while the light controller can focus on controlling the lighting sequence events and synchronize the events between all the aircrafts at the same time. We will also need 4 more actors for the field shot that has to include 2 of them that will operate the video cameras at the same time. So we are now up to a total of 9 – 10 people needed for such a project. Another item we might want to add some speaker system with sound effects to play back some audio in the background to create some sound effects of the UFO as they approach and then depart the stage aria. To make the video more realistic there will be no sound or video dubbing or overlays that can be analyzed by experts that view the video. With two video perspectives that are captured and uncut it will proved from mathematical triangulation that the objects in the video are real UFO as they really will be. Another added possibility that would require more funding for equipment we don't presently fully have yet is: to use a group of APM (arducopter) equipped aircraft like our Arducopter that at present we only have a quantity of one. With an autonomous sequence that we could program into the group of aircraft we could do some cool stunts like have them all fly in sync in a circle around an object and all fly off as they form a line in and off the center stage of the event. Also another sequence could be that they all start at or fly in at the same position X Y for lat, long but would be at 10 - 20 feet apart from each other in altitude then at a sync signal point in time they all fly into a hex pattern out from the center then all stop then start to all fly in a circular pattern around the center point and later change to a figure 8 pattern or other more complex shapes of flight pattern. I think with practice human pilots can perform this also but with the auto pilot we should be able to create repeatable and more complex precision sequences in the APM that could also control turning off and on the lights and lasers on the aircraft as part of the autopilot sequence program. This all sounds like it would be fun but may end up being much more work than I realize and also to organize a large number of people to perform such a task won't be an easy thing to do. But even if it never gets done. It sure is fun just thinking about it. And if we don't do it I'm sure others are already plotting to be doing it someplace if they haven't done it already. So we best start to practice with a group flights in planed sequences just to see what can really be done before we continue any of this plan. Also some test shots need to be done to make sure not too much video resolution is available to identify the aircrafts. Some added smoke might also help to make the lasers and lights show up better. I'll keep thinking about this crazy idea as others add to what they think could or should be done. So if you read in the paper in the near future or see a video news clip about a UFO sighting in Pattaya, you can bet I had something to do with it. Or did I? It was all a plan to cover up the truth. I love UFO's so much I guess if I can't find one I'll just have to make some.

Update from the producer:
[10:39:32 AM] laserpaul: no no, wait wait, this scrip[t has to be re-wreitten. First, the guy that gets surrounded by UFO's would have to be me, and this character is making out around the camp fire with one of the hotter go go girls from a disco on walking street. Yea, that's it. okay, since you are the producer and director of acting, it is up to you to talk her into this, but I can find several who would be in this video for the right price.
[10:42:36 AM] laserpaul: Okay, then the script goes on to the show the couple are getting down and naked when the UFO's surround them. Yea, that's the ticket. sure. so, sorry director, but you have to find another pilot, as I want to be the star of this one (and director of laser and special effects) ha ha. oh yea (how in the world are you going to get five rc pilots to fly in tandem or formation , even in a circle. ha ha. But on another note, we actually could have five systems flying soon if we wanted. Two running phantom systems, one walker, one H2O. THen fly the arduo or tube copter from the DX6. yea, it would work. and good luck on the formation. ha ha. If I were you, I would start working on designing the switching circuit for the onboard laser. yea. should not be hard. then get me a leading lady, and no, you cant count on Namfon
[10:43:31 AM] laserpaul: and found a couple of orange rx units. Will pack them up.
[10:43:47 AM] laserpaul: so we have enough